Clean Vehicle History Report, Backup Camera, Bluetooth, Sunroof/Moonroof, Leather Seats, 3.0L V6 Flex Fuel, 6-Speed Automatic. Red 2010 Ford Fusion SEL FWD 6-Speed Automatic 3.0L V6 Flex Fuel 19/27 City/Highway MPG Awards: * 2010 KBB.com Brand Image Awards Robinson Brothers Ford Lincoln specializes in one owner lease returns and trade in vehicles - not cars from rental companies! We believe it is a much better value for your money to purchase a one owner lease return or a customer trade-in as opposed to rental units that have not been taken care of! We offer a complimentary vehicle history report on all of our vehicles! Buy with confidence! Reviews: * If you need the practicality of a well-appointed, well-engineered and crisp-handling family-sized four-door that also offers a choice of fuel-efficient four-or six-cylinder engines and available all-wheel drive, the 2010 Ford Fusion merits serious consideration for a spot in your garage. Source: KBB.com

Model Overview
For 2010, the Ford Fusion returns in S, SE and SEL trim levels, with Sport and Hybrid models now added to the mix. Both 4- and 6-cylinder models are again available, with 4-cylinder models coming standard with front-wheel drive and V6 models featuring an available all-wheel drive system.
The base-level S borrows its new 2.5-liter 175-horsepower 4-cylinder engine from the Ford Escape, using an electrically-operated throttle control, new intake and exhaust manifolds and variable cam timing to achieve a broad torque curve and increased fuel economy. The 3.0-liter V6 returns in the SE and SEL, this year receiving a boost up to 240 horsepower thanks to a new air induction system and Ford's Cam Torque Actuated variable valve timing. This new technology uses torsional energy rather than pressurized oil to phase the cams, allowing for a smaller oil pump and helping achieve an increase in power as well as a claimed 2 mpg increase in highway fuel economy. The 3.0-liter V6 is now also capable of running on E85.

A Sport model is also available, which features a 263-horsepower 3.5-liter version of Ford's Duratec V6 previously available in the Lincoln MKZ--the Fusion's platform twin. The engine uses a compact and lightweight dual-overhead cam valvetrain for increased peak power and smooth operation, and despite a rather high 10.3:1 compression ratio, does not require premium fuel like some of its competitors. The Sport also gets revised suspension and steering components, 18-inch wheels and unique styling cues inside and out.

Also new for 2010 is the addition of a hybrid model, which features an Atkinson-cycle 2.5-liter 4-cylinder engine paired with an electric motor and an innovative nickel-metal hydride (NiMH) battery, making a combined 191 net horsepower. The hybrid Fusion can run on either one or both of its power sources, with the electric motor alone capable of propelling the car to 47 mph. It requires no plug-in charging, and Ford claims it's the most fuel-efficient hybrid sedan in America at 41 mpg city and 36 mpg highway.

Options on the S include remote engine start on automatic-equipped versions as well as heavy-duty floor mats, which can be added across the model line. Stepping up to the SE adds the availability of a sunroof, Ford's Sync system and an automatic dimming rearview mirror. The Sport model comes with the same available options as those available on the SEL, but can also be had with a blind spot warning indicator, a back-up camera, and a Sony sound system with 12 speakers and a 6-disc CD changer. SEL and Sport versions are also available with a voice-activated hard-drive-based navigation system. 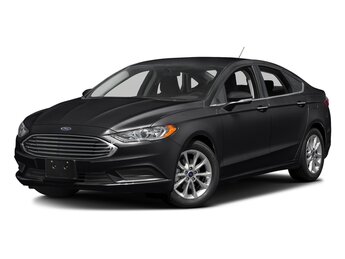 2014 Ford Fusion SE
Gray
* Pricing - All vehicle pricing shown is assumed to be correct and accurate. Incentives, credit restrictions, qualifying programs, residency, and fees may raise, lower, or otherwise augment monthly payments. Additionally, incentives offered by the manufacturer are subject to change and may fluctuate or differ based on region and other considerations. Unless otherwise noted or specified, pricing shown does not include title, registration, or tax fees and costs. Price subject to change.

* MPG - Vehicle information, as well as features and other inclusions, may vary by model and are based exclusively on standard equipment. No claims, warranties, or guarantees have been made related to the accuracy of customer payments, model equipment, or vehicle pricing. Please call with any questions you might have and to reassert the accuracy of any information presented here. Robinson Brothers Ford Lincoln specializes in one owner lease returns and trade in vehicles - not cars from rental companies! We believe it is a much better value for your money to purchase a completely reconditioned carefully selected one owner lease return or trade-in as opposed to rental units that have not been taken care of! All of our units are carefully inspected and certified by our factory ASE certified technicians, and we offer a complimentary vehicle history report on all of our vehicles! Buy with confidence!
Price subject to change.
Close
Close
© 2021 Robinson Brothers Ford | Privacy Policy
Much from Remora
Send Now
Close
Share Search Results